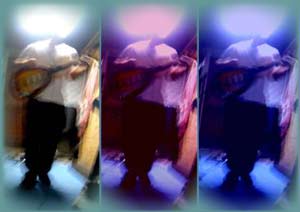 Benn Ray, Mobtown Shank -
"Best Baltimore Album of 2011: Wow. Just wow. This was the album I always hoped the Jennifers would release. Hooky as shit. Lotsa guitars. The Andy Partridge influence is played down to just an influence. This goes down as one of the best Baltimore records of all time. Classic guitar pop. There is not a clunker on the whole record. And each time you listen you find a different song that works its way under your skin."

Razorcake -
"A fantastic mental pipe cleaner of a record - brilliant."

The Urbanite -
"The bottom line: Colors from the Future is a very good album."

Go Metric Jennifers Review and Interviews: Parts 2, 3, 4
"Best album of 2007? I recognize that it's early in the year but I'm going to call it now: The Jennifers' latest disc, Colors From the Future."

BluesBunny
"at their best this band are a match for anyone in the guitar pop arena."

SENBaltimore
"Allusions to XTC obvious and ubiquitous, the songwriting is much comparable to Robyn Hitchcock. Like Hitchcock, The Jennifers offer up alt-pop with tongue-in-cheek, obvious yet ambiguous lyrics."

IndieMP3.co.uk
"I have been most impressed with the guitar pop on show"